Inspectors from HM Inspectorate of Probation (HMIP) who visited the service in June flagged up an "impressive range" of support and services offered not only to young offenders but also their siblings.

"Unusually, their siblings can also access support to prevent them getting involved in antisocial behaviour or crime," inspectors said.

Initiatives such as these take on greater significance in light of research from the US that shows having an imprisoned family member is one of the most frequently-cited traumatic experiences for young offenders.

Andrew Kaiser, head of specialist services at Derby City Council, said the HMIP inspection team was "particularly enthusiastic" about the sibling work being carried out by the YOS.

"It's difficult to talk about what other local authorities are providing, but HMIP thought our work around siblings was a little different," he says.

Kaiser says inspectors praised the service's innovative approach to using existing resources within its prevention offer to extend the support available for siblings of young offenders.

He explains that the service employs workers whose role it is to identify those children in need of support because of their sibling's offending behaviour.

"They will come along to meetings or clinics and pick up work with siblings as part of their prevention role. So that can be a range of young people who are in custody, or on community orders or referral orders," he says.

Kaiser describes how inspectors were "taken aback" by the level of resources available to the YOS, which include a mental health nurse and youth wellbeing officer.

The latter post, Kaiser says, is innovative as it is funded by a grant from NHS England.

"The officer works with those at risk of poor mental health outcomes later on, so it's very much an early targeted service around mental health," he says.

Together with these professionals, the multi-agency service also comprises a seconded police officer, a parenting officer as well as staff who have undergone systemic family practice training.

"We have our service level agreements in place about what will be delivered and how it will be measured, so there's really good collaboration across the youth justice partnership in Derby," adds Kaiser.

Inspectors also praised the location of the YOS - housed within the city's Connexions office in the town centre, alongside a number of other agencies.

Kaiser describes the set up as a "one-stop shop" that is very much "young person friendly" and unlike a traditional YOS office.

"The physical environment is part of the main criteria to make sure young people engage in work to reduce offending behaviour," he says.

The service has also been recognised for contributing to the funding of a prison officer at HMP Nottingham who attends key meetings, concerning risk, release and planning, and co-ordinates with YOS staff.

Historically, Derby has had a reputation for being a "high sentencing court", but custody figures have reduced significantly in recent times despite this challenge, says Kaiser.

"In the last quarter, our results were the best in a long time," he adds. 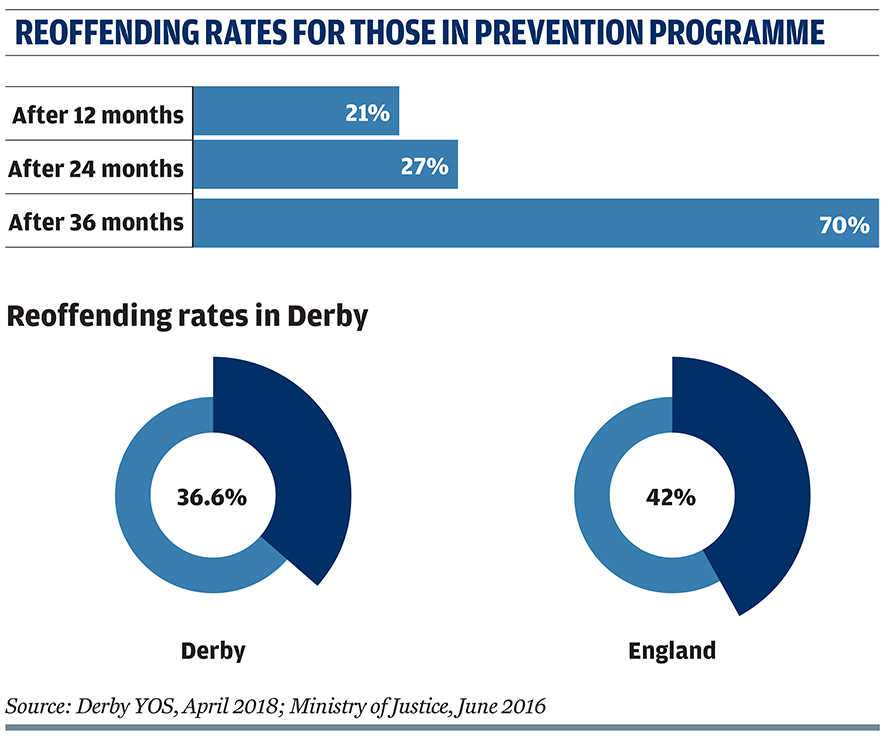 Statistics from the Ministry of Justice for July 2015 to June 2016 show a 36.6 per cent reoffending rate for Derby compared to an average rate of 41.9 per cent for England and Wales. These figures continue to improve, says Kaiser, and the siblings work has been "influential" in this.

Kaiser says of those young people who have received prevention interventions, a high proportion will not reoffend.

He says while the number of young people who reoffend in Derby is higher than a number of comparator areas, the number of "reoffences" they commit is significantly lower.

"We have a challenge still with the number of those who do reoffend, but the volume of what they do is less than others, so it's about trying to reduce the actual numbers of those who do something again," he says.