Peacemakers is a global concept and movement which advocates for peace - both from conflict and injustice.

It is a response to social and political actions that are based on greed, and comes from a perspective that people can change policies.

Those behind the Peacemakers concept include Y Global, an independent development and solidarity organisation owned by the Norwegian YWCA (Young Women Leading Change) and YMCA and the Norwegian YWCA-YMCA scouts.

It describes the mission of Peacemakers as to "mobilise the masses globally who will support and benefit from policy change, empower them with policy knowledge and collectively organise policy advocacy work".

Peacemaker groups are engaged young people who want to work for social justice and tackle poverty. Some are organised as part of YMCA or YWCA local branches, while others are groups of friends who come together to make a difference.

Y Global says Peacemakers "want to use their voice to empower themselves and others in the global struggle against injustice".

Peacemaker groups exist in many countries already, including Kenya, which hosted a seven-strong delegation from YMCA Norfolk last year to strengthen ties between the organisations. The two-week trip made a huge impact on the Norfolk group, which has gone on to create its own version of a Peacemakers project.

Kenya is the 47th largest country in the world and 27th most populous - it has a population of 52 million. Situated in eastern Africa, its economy is largely dependent on agriculture even though 75 per cent of the land is classed as non-arable.

The Global Multidimensional Poverty Index, which collates a range of measures such as life expectancy, standards of living and education levels, shows that in 2014, 40 per cent of Kenyans were poor. Other poverty measures have shown that Kenyans are particularly deprived in access to cooking fuel, electricity and sanitation.

According to the data from Kenya National Bureau of Statistics, pneumonia, HIV and malaria are the main causes of mortality. In particular, Kenya is ranked fourth highest in HIV infections in the world with 1.6 million people (16 per cent) infected with the disease.

The capital Nairobi is home to around four million citizens, however its sprawling townships and slums has grown the population to around seven million. The coastal former capital Mombasa is the country's second city.

Kenya is an extremely unequal country and its inequality is mainly reflected in wealth distribution, poverty level and human rights. Analysis shows that the wealthiest 10 per cent of citizens control around 40 per cent of the country's wealth.

To tackle high levels of poverty, particularly in parts of the country where incomes are low - 17 per cent of the population live on less than $1.25 a day - the government introduced a National Poverty Eradication Plan (NPEP).

With the assistance of the Commission of Poverty Eradication and Poverty Eradication Unit, the plan has provided various poverty reduction programmes. It focused on improving living standards in the poorest households by, for instance, improving welfare support for householders with low income that were unable to access safe food, healthcare and education.

Objectives of the NPEP involved wide aspects, such as the introduction of universal education, primary health care, safe drinking water, and closing the gap between rural and urban social development. HIV infections have slowed due to improvements in health services.

The 2003 economic strategy has seen the economy grow 19 per cent and Kenya leads Africa in innovation - its 2030 vision is for an economy built around small and medium enterprises.

In 2012, eight groups of Peacemakers were established in Kenya, including in Nairobi and Mombasa. These are made up of a core group of individuals most of whom are volunteers, but some are employed part time by YMCA Kenya. They go out into the townships and slums of the big cities to engage young people and help set up activities they can participate in. This could be establishing a football team, building a hut that can act as a base for events and informal education or undertaking clean-up activities of the local area.

"They came up with the idea of developing a sanitary towel made out of materials that could be reused," he explains. "They designed it and had them made locally before distributing them. We've done some fundraising that has helped them pay for a block purchase of the products so they can reach more young women."

Other activities the Kenyan Peacemakers have been involved in include educating boys and girls about the risks of female genital mutilation, promoting women's rights and challenging the culture of arranged marriages.

In the run-down Shaurimoyo district of Nairobi, the Peacemakers have established a school where young people can take courses including learning how to use computers. It is also home to a studio where young people can go to socialise and dance. Meanwhile, the football team has grown to more than 100 boys and girls playing regularly.

The Peacemakers have been instrumental in creating these opportunities explains Wall, adding that they "fill the gap" between government and community, similar to the way the voluntary sector does in the UK.

"They have a very positive influence in the area," he says. "Some of their work doesn't get recognised but they still do it due to the importance they place on the wider community and improving the lives of young people."

In addition to helping improve the practical and material aspects of young people's lives, the Peacemakers have also set up debating groups which are helping young people express their views.

"These young people are becoming part of their community and getting their voices heard by decisionmakers," Wall adds.

"While YMCA Kenya doesn't have as much influence with politicians as perhaps we do here, what they do have is the ability to do things that have an almost instant impact - for example, you saw malnourished children receiving a hot meal and feeling better.

"It was very impressive to witness and I've taken a lot away from seeing it." 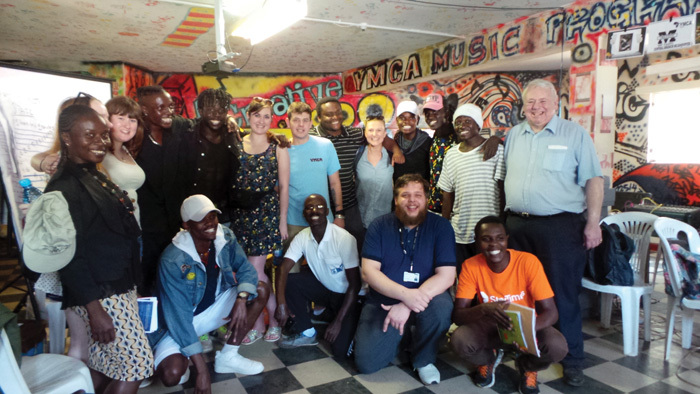 I came back from Kenya wanting to adopt the Peacemakers approach and adapt it for use in Norfolk. We found an area that we thought it would suit to trial it on. I had been contacted by parish and county councillors raising concerns about rising antisocial behaviour by young people in a village.

We were employed two nights a week to go to the areas where young people were hanging out to talk to them. They were playing loud music, drinking and smoking cannabis. We did it for four months and it proved to be so successful that the council recommissioned the youth work project. It gave young people a voice - they went into speak to the parish council to use their voice to highlight their needs and the councillors listened and acted by funding the creation of a local recreation centre that addressed antisocial behaviour.

We used the outcomes data we gathered from this project to apply for a new pot of money to deliver a similar project in Gorleston near Great Yarmouth. The issues young people faced here were more complex, including county lines activity, and sexual and criminal exploitation of young people. We worked closely with the police and community support officers to get intelligence about where young people were gathering so that we could engage them initially. We became the first responders for them.

We'd go out two nights a week and chat to the young people to find out about them and engage in a positive way. We then tried to put things in place to address any needs; for example, a number of the young people had dropped out of school and wanted to find out about routes back into education. So we brought along coaches from the Ontrack partnership, which we run with four other charities, who specialise in working with 16- to 24-year-olds and discussing what work and training options are open to them.

The young people often congregated in a disused toilet block in a park so we paid for them to redecorate and refurbish it so that it can be a place where they can go and hang out. We are now looking at how the facilities can be used in the winter and possibly running a bike maintenance workshop.

We're still at the empowerment stage of the project by giving young people a voice in their community and be a positive influence. I think it will be a slow burner but will be successful.

Peacemakers has now become our detached youth work project, and I always highlight it when we have discussions with funders. We are trying to give young people in Norfolk the tools to make changes. In Kenya, the outcomes that Peacemakers deliver are life changing, while here we want to open young people's eyes to what is available."