Yorkshire town with a history of milling was rocked by 2014 child sexual exploitation scandal and is still grappling with high demand.

Rotherham Metropolitan Borough Council hit the headlines in 2014 when an independent report into child sexual exploitation concluded 1,400 children, mainly girls, had been abused over a period of more than a decade.

The report was critical of child protection and safeguarding services, and a subsequent Ofsted inspection rated the Yorkshire town's children's services as "inadequate".

A new management team, led by director of children's services Ian Thomas, was inserted in January 2015 to turn the department around (see DCS view, below).

According to latest estimates, 56,400 of the town's 204,400 population are aged under 18. Meanwhile, 95 per cent of Rotherham residents are UK-born, 6.6 per cent are unemployed and 18.7 per cent on means-tested benefits. 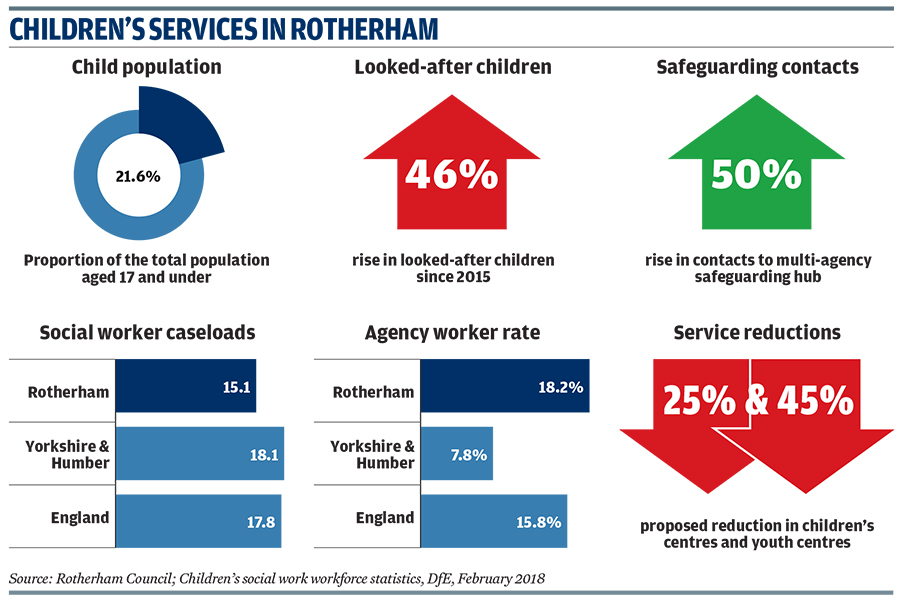 DCS View: ‘Relentless' focus on quality the key to turnaround in Rotherham

One of the challenges I was given when I joined Rotherham in January 2015 was to turn around a children's services department that was in the bottom six per cent in the country in terms of Ofsted rating. The system was not working well for children and it reflected failures going back decades. All agencies signed up to a vision to become "outstanding". We had help from the Ofsted improvement offer, Lincolnshire became our practice partner and Malcolm Newsam our independent commissioner. We managed to attract good leaders from within the organisation - 75 per cent of the staff working at the department in 2014 are still there now, which speaks volumes about the talent there. We invested in Signs of Safety, restorative practice and social pedagogy, and created the Rotherham Family Model which requires everyone to ask ‘would this be good enough for my child'?

We worked hard to get caseloads down to the point where it is now below the England average. We also made good use of agency staff, which we've managed to reduce over time. We've introduced a new IT system, smaller teams and more supervision. This has helped us attract some of the best newly qualified social workers in the region.

We are now in the top 16 per cent in terms of Ofsted ratings. My successor [Thomas became chief executive of Lewisham Council on 14 May] will need to ensure we continue the momentum and have a relentless focus on quality.

They will have to do it during a perfect storm: there were 1,400 girls that were abused and [many] looked-after children that were failed in Rotherham - these were children that we should have intervened with - some of whom are now having families and struggling to parent their children.

There is also an unprecedented demand in the system: we are helping 88 per cent more children than three years ago, there is a 76 per cent rise in child protection plans, 46 per cent increase in looked-after children and contacts to our multi-agency safeguarding hub are up 50 per cent.

The challenge for the person coming in is to use evidence-based techniques to reduce demand for social care and drive down the unit cost for special needs children and those in care.

Despite this it is an exciting opportunity to work with some of the most resilient people that I have ever come across.