Outstanding-rated children's services has succeeded despite a rise in the child population and levels of poverty.

Leeds City Council is one of the few to be judged "outstanding" for children's services.

When awarding Leeds its top rating last December, Ofsted national director for social care Yvette Stanley praised the authority for delivering on its pledge to be a "child-friendly city".

"The whole report was a pleasure to read," said Stanley, "but it is particularly noteworthy that substantial progress has been made in delivering this vision."

The outstanding rating came just eight years after children's services was judged "inadequate" for safeguarding in 2010. Since then, the council's budget has also shrunk by £214m, or 40 per cent, and an additional 10,000 school places have needed to be created and funded to cope with a rising child population.

Much of the population growth over the past decade has been in poorer parts of the city, and nearly a quarter of children now live in poverty, most in households where one or more adults work. Consequently, the proportion of children eligible for free school meals is above the national average at both primary and secondary level.

Despite these challenging circumstances, children's services has been successful in reducing the number of children in need, on protection plans and in care over the past five years. Inspectors particularly praised front door practice, domestic abuse support and quality of assessments.

The department has developed an expertise in relationship-based practice and family group conferencing. Meanwhile, it has maintained a network of children's centres - bucking the national trend - and invested in community-based support.

Ofsted praised the leadership of the department, which has been run by Steve Walker as director of children and family services since August 2016, when he took over from the retiring Nigel Richardson. Walker, a former Glasgow social worker and previously deputy director in Leeds, praised Richardson's contribution to the authority's success.

"Nigel did a great job of getting us to a good position," he says.

"In 2015, when we got the ‘good' rating from Ofsted straight away people started saying ‘what do we need to do to get to outstanding?'. But we've never chased the Ofsted judgments - it's about how we make it better for a child growing up in Leeds." 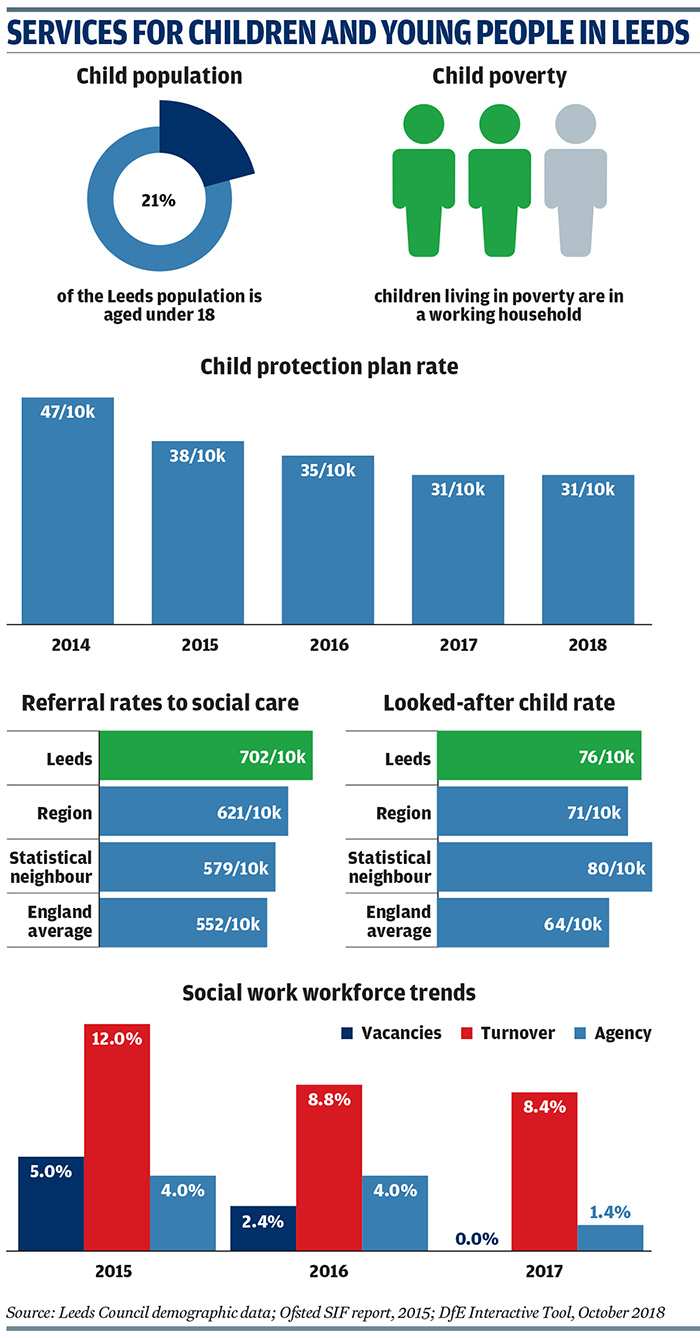 DCS View:
'Developing relationships is at the centre of good social work'

The council has an ambition for Leeds to be the best city in the UK - being a child-friendly city is pivotal in that. This is at the heart of the wider growth plan of the city and is something that the whole community has got behind.

We've seen growth in people coming to Leeds to live and work and have created 10,000 new school places this decade despite the challenges of austerity.

In terms of transforming children's services we had three obsessions: to reduce the number of looked-after children, as we had way too many; to improve access to education, which was largely about attendance; and ensuring young people have a destination, with the aim of cutting the Neet (not in education, employment or training) rate. The figures for these measures are reported to the council chief executive, executive member for children's services and leader of the council on a weekly basis. It's important to remember that behind these figures are individual children.

Our approach has focused on getting the practice right. Social work is about relationships, and practitioners need the support and stability to develop these relationships and work with children and families to make the changes needed. We've invested in relational and restorative practice, which means working ‘with' families, not doing things ‘to' or ‘for' them.

We've invested in family group conferencing (FGC) - in 2009/10, we had three FGC workers, now we have the largest FGC service in the country. At a child protection initial case conference or if a legal order is to be made, we will offer a FGC if it is safe to do so. It is about supporting families to resolve their problems by bringing together all the extended family resources available to that child. Despite the child population in Leeds growing, the number of children on protection plans has fallen.

In 2010, a quarter of our social worker posts were either vacant or filled by agency staff, costing us £5m a year. We recognised that we were not going to get a lot of experienced social workers elect to come to an "inadequate" authority, so we looked to what our social workers were telling us they wanted. Instead of recruiting, we focused on retaining staff.

The council has lost 40 per cent of its budget, but has worked hard to protect children's services spending. We've almost halved the number of children in external residential placements - because it improves outcomes and makes significant savings.

Things will get more challenging - the number of children living in poverty has increased and much of the growth in the child population has been in the most deprived areas. How do we hang onto early intervention services? Rather than cutting children's centres, we've been well supported by health services through public health funding.

We can't reduce the number of children in poverty, but we can reduce the impact of it on them. Many children living in poverty have a parent in work, and we need to be looking at what we can do to support parenting, such as setting up reading clubs in the community. It's about making sure there are opportunities for children to take part in activities outside of school and building communities' social capital.