Brighton joined with Hove to become a city in 2000. It is known as being a cultural centre, tourist destination and nightlife mecca on the south coast and, according to 2014 Office for National Statistics figures, attracts more tourists than any other seaside resort in England.

But with its popularity comes social problems - it has high levels of mental health problems, domestic abuse and substance misuse. It has the highest rates of smoking and cannabis use by 15-year-olds in England, and the third highest rate of children who drink alcohol once a week.

There are 58,000 children and young people living in the city, and in the year ending June 2017, 2,656 children were referred to children's social care services.

Brighton is England's 102nd most deprived area out of 326 councils. 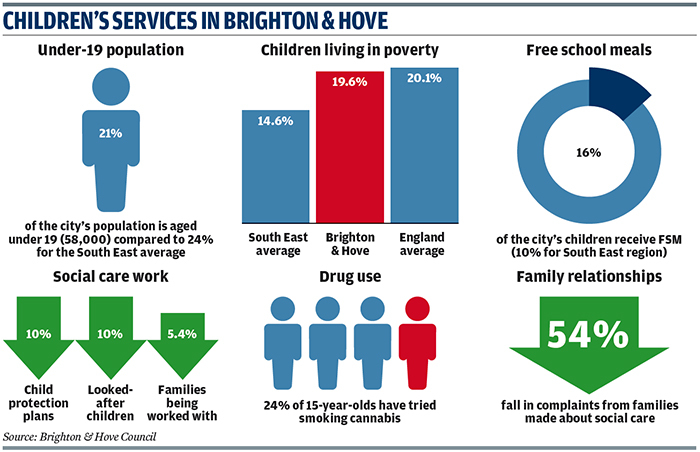 While the bright lights of Brighton are one of the reasons it is "celebrated", Tom Stibbs, principal social worker at Brighton & Hove Council, says they also increase risk factors for vulnerable children and families.

"It's a dichotomy," he says. "Drug and alcohol misuse are significant problems for young people in the city, and are factors that contribute to domestic violence and mental ill health. A recent report by our director of public health highlights the links between substance abuse and illegal behaviour and mental health problems."

The prevalence of bars and nightclubs means adolescents are particularly likely to engage in risk-taking behaviour, Stibbs explains, which can leave them vulnerable to being victims of crime and exploitation.

Recognising they needed to adapt to better meet the needs of vulnerable children and young people, the council embarked in 2014 on a transformation of the culture and structures in children's services. A relationship-based practice approach was introduced department-wide and area teams were reorganised into "pods" made up of social workers, substance misuse workers and health professionals with a wide range of skills. The aim is for families to be worked with intensively after referral from the multi agency safeguarding hub.

"We were struggling to engage young people so we recognised we needed to change the way we worked," he explains. "Social workers need to be building relationships with young people - that's the best way of safeguarding them.

"Also, the introduction of pods has removed transition points in the system so social workers focus on delivering change with a family rather than getting them to the next stage of the referral process."

Nearly two years on from the implementation of the new approach, Stibbs says the department is seeing improved outcomes (see graphics). "Families are having a better experience and complaints have halved. Staff are also saying things have improved, which I think is because they are receiving consistent support from managers and the space to demonstrate reflective practice."

In addition, there has been a fall in child protection plans and children in care, while the number of children being worked with bythe council has fallen by around five per cent.

The reorganisation saw the creation of a multi-agency adolescent pod that works with young people at risk of coming into care because of offending behaviour or substance misuse. Tackling drug and alcohol use is a key element of the service, which also has a clinical psychologist attached through a pilot developed with the child and adolescent mental health service (CAMHS).

"The consultant helps social workers to think about what's going on for that young person and whether a referral to CAMHS is needed or whether they need signposting to services. Mental health support becomes integral to the planning process," he says.

"Another new development is an outreach service at the weekends and in the evenings where a worker can visit a young person's home or go on an activity and offer support out of hours."