An 'outstanding' Ofsted judgment can take years of hard work. With nearly one in five early years settings having achieved this, what can leaders do to maintain the momentum, asks Jo Stephenson.

Achieving an "outstanding" rating from Ofsted is something the vast majority of early years providers aspire to. But once you get there the pressure is on to maintain that rating.

The latest inspection data shows that by the end of last year 18 per cent of all early years providers had achieved the top rating - 9,256 settings in all - with overall standards continuing to increase year on year.

However, the data also shows some settings judged outstanding at their last inspection slipped down. In all, 83 childcare providers inspected in 2017 dropped from outstanding, of which 61 went down to good, 16 to requires improvement and six to inadequate.

It is fantastic to be judged outstanding, but June O'Sullivan, chief executive of the London Early Years Foundation (LEYF), says it is unrealistic to expect settings to perform at their best every single day.

"Nurseries are dynamic places and one day is outstanding and the next day it can drop right down because you have two staff off sick, the children are all going down with chickenpox, the weather is terrible, the food is delayed and everything goes awry," she says.

What matters, however, is that managers and all staff "know what outstanding looks like and know they haven't achieved it that day".

Ofsted's inspection handbook provides a broad outline of what an outstanding setting should be. Qualities of outstanding settings set out in the regulator's annual report include exceptional leadership and a "relentless focus" on teaching, learning, assessment and planning. Typical features of outstanding nurseries include ongoing staff development, a vibrant curriculum, a very strong focus on early reading and literacy, and rigorous self-evaluation.

"That is outstanding according to Ofsted but what does that look like at Busy Rabbits nursery?" says O'Sullivan. "Managers need to do a lot of work articulating that - it shouldn't just be kept for staff meetings, it's about the conversations that are had constantly. The stronger those conversations are, the stronger people are at reflecting and describing and that's often the only difference between good and outstanding."

It can be particularly difficult for a new manager walking into an outstanding setting.

"You have the pressure of getting your head round a new organisation, a new team, a new environment, so maintaining outstanding is really hard and a bit much to ask - everyone needs six months to get their feet under the table," says O'Sullivan.

When it comes to the inspection itself she maintains there is a certain amount of luck involved. "It's often not a judgment on the nursery but a judgment on the inspection. Sometimes at settings that probably don't deserve an outstanding everything comes together on the day and a miracle happens - even the staff are surprised," she says. "At the same time all of us have had one where you can see it unravelling before your eyes and there is nothing anyone can do to save it."

Nevertheless, those settings that can be most confident of remaining outstanding are those that have reached a "transformational state so all the policies, procedure and methodology are embedded and just flow", says O'Sullivan.

"Ideally a manager should hardly have to do any work for an inspection because they know an inspector can come in and the thing is just going to run because every one of the staff is confident and competent in their teaching and understands what they are supposed to be doing, they are able to set up the environment in a beautiful, engaging way and you know you have a good relationship with parents and each other," she says.

"We've noticed from our recent inspections where inspectors weren't sure about giving an outstanding that it was really about the embedding," says O'Sullivan. "Inspectors have told us they have seen some outstanding elements of practice but have not seen some things embedded enough."

Demonstrating the best of your setting can be hard when staff are less experienced or nervous but O'Sullivan adds: "If it is truly embedded they should be able to do it whether or not they are being observed."

Being able to explain what you're doing and why - with evidence and theory to back it up - is also important, especially when it does not match with a certain type of practice approach that inspectors may be looking for.

Managers may sometimes have to "push back" to inspectors. "We say to our staff ‘Don't let your inspector lead your inspection - you lead it'. If people say ‘I don't want to see this' then you say ‘Well, I'd like you to see it because…' That is easier with confident, old-hand inspectors but newer inspectors can be twitchy. An intelligent inspector enjoys and engages in a pedagogical conversation."

LEYF is a social enterprise that runs 38 settings in all, working with children in some of the most deprived parts of the capital.

In order to help settings aim high, the organisation teams leaders from outstanding settings with those who are due an inspection or struggling with a particular issue to provide mentoring and support.

Nurseries operating in disadvantaged areas tend to have poorer outcomes and fewer good and outstanding ratings but O'Sullivan is adamant that operating in challenging circumstances should not be used as an excuse not to aim for the top.

"Some of our nurseries are in very poor areas and no one would go in there except for us but they are where outstanding counts the most," she says.

"It is unacceptable to assume that you can never get an outstanding if you work in the poorest neighbourhoods and it is unambitious for us not to expect those nurseries to be outstanding." 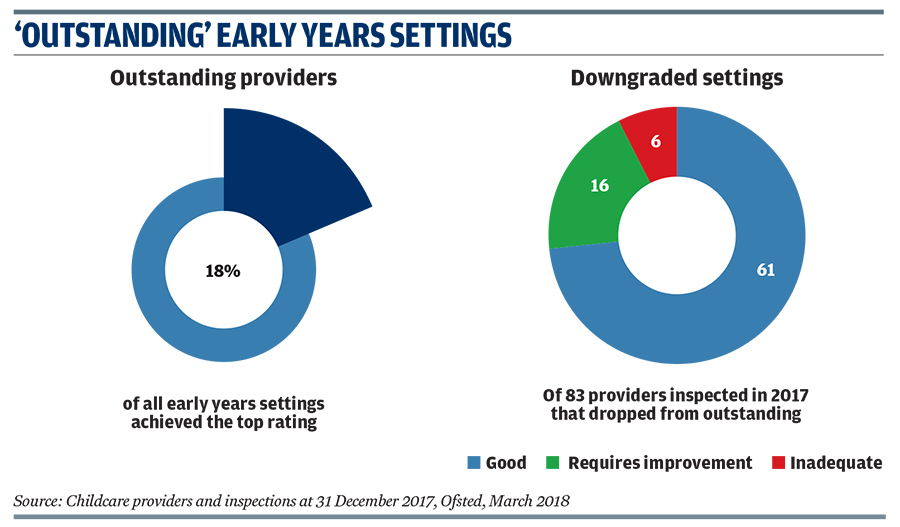 This was nearly four years on from the setting's last visit from Ofsted in March 2014 and the inspector praised leaders' efforts to keep standards high.

"You have not been complacent; you have continued to raise the bar and improve the nursery further," said the inspection report.

At the previous inspection, the setting was asked to develop the quality of outdoor learning and the inspector found staff had created an "exciting and versatile" outdoor space that was used "very effectively to develop children's skills across the whole spectrum of learning".

Key factors in the setting's outstanding performance in all areas include robust systems to measure and record children's progress and ensure they get targeted support if needed, and excellent management of staff performance linked to the overall vision for the setting.

"This means that staff know exactly where they need to focus their efforts," said the report.

EDUCATION Ofsted has pledged to get tough on the practice of "off-rolling", which sees schools encourage challenging pupils to leave without officially excluding them. Senior Ofsted inspector Sue Morris-King told MPs on the education select committee, which is looking into alternative education provision, the regulator would increase scrutiny of off-rolling and inspectors had undergone specialist training on the issue.

SOCIAL CARE Staff in children's homes should be required to register with an independent professional body on top of settings being regulated by Ofsted, the Independent Inquiry into Child Sex Abuse has recommended. This is one of a series of recommendations in a interim report by the inquiry, which said professional registration of children's home managers should be prioritised. "Regulation of a care setting by an independent inspectorate complements effective professional workforce registration - it does not replace it," says the document.

EARLY YEARS Ofsted has removed all references to the word "investigation" from its guidance for early years providers on compliance and enforcement action in a bid to avoid confusion about its powers. "The term caused confusion about Ofsted powers in relation to looking into concerns about a provider," said the regulator. "It is other agencies such as the police and children's social services who undertake investigations."

EDUCATION Council and health agencies in Redcar and Cleveland have been told to take action to address weakness in support for children and young people with special educational needs and disabilities (SEND) including a lack of joint planning and commissioning. A joint local area SEND inspection carried out by Ofsted and the Care Quality Commission in February and March also found leaders needed a better understanding of outcomes for children and young people at different stages. However, inspectors praised work with under-fives and in primary schools.

YOUTH JUSTICE Uncertainty over the future of Hindley Prison and Young Offender Institution in Wigan has undermined efforts to improve conditions for inmates, according to a report by the Inspectorate of Prisons. Chief inspector of prisons Peter Clarke said the jail had been left in "limbo" after its closure was announced in March 2017 but then postponed. During an unannounced visit in December last year, inspectors found some improvements in safety, which was upgraded from "poor" to "not sufficiently good" but "purposeful activity" was once again rated poor.