Programme prevents homelessness by giving young people the skills they need to move into housing and live independently.

The programme costs around £1,000 per young person to deliver. Housing associations pay for some of the cost while other funding comes from grants, trusts and donations

Settle was founded by social entrepreneurs Rich Grahame and Katie Slee in 2015. "I was working at a Centrepoint hostel and noticed young people often struggled to cope when they moved into their first flat," says Grahame. "They would get into council tax debt, struggle to pay rent on time, and would be evicted, returning to the hostel. This time they would be deemed intentionally homeless so struggled to get future housing."

Grahame and Slee developed an initial programme to prevent youth homelessness while taking part the Year Here postgraduate course in social innovation. The scheme was piloted with 10 young people in North London and has since been developed further and rolled out across four London housing associations.

Housing associations refer young people aged 18 to 25 to the programme when they move into their first flat. "If a young person is eligible for social housing they will have what the council deems as some sort of vulnerability," says Grahame. "We work with a lot of single mothers, care leavers, quite a few victims of domestic violence and those with mental health issues. Many young people we work with are not in education, employment or training."

A case worker contacts the young person within a week of moving then makes weekly hour-long visits for up to six months to help them get established in their new home. "We find visiting young people in their own home is most effective, partly because it helps with engagement but also because you get a better sense of how they are doing - you can see if they have no bed or if they are not opening letters," says Grahame.

Young people are given a welcome pack that includes a diary, a list of 25 things to do under the age of 25 - from registering with a GP to buying a houseplant - and information on accessing further help. Case workers support young people around three areas: money, tenancy and lifestyle. "If they have existing debts we make sure they have the right support to tackle those," says Grahame. "Universal Credit has put a lot of young people in a very precarious position."

Young people can decide what is covered in the sessions but may not take the lead at the start. "Then they realise how much support they need so will ask things like: ‘Can you help find a cheap gas provider?'" says Grahame. Case workers, who are all trained and accredited coaches, act as advocates for young people with the council and landlords.

"After six months our aim is to make young people independent, we don't want to foster dependency on us," says Grahame. "We make sure they have support in place from specialist agencies such as mental health services if that is what they need. However, we sometimes get young people calling us after around a year with an issue, and our funding is flexible enough that we can work with them if necessary."

A recent donation from financial services company JP Morgan will enable the organisation to expand its work with plans to double in size next year and again the following year. 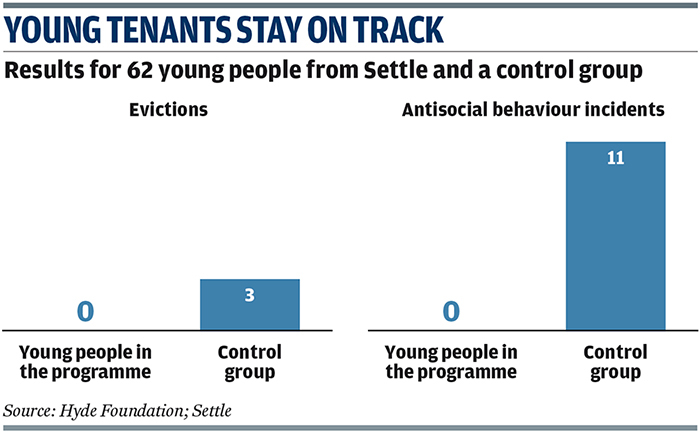