Residentials offer vulnerable children the chance to try new experiences, improve their resilience, and build a stronger sense of themselve.

Charity Free to Be Kids, which delivers Thrive Outside, is supported by grants and in-kind support from a range of businesses and charitable trusts. A £72,000 grant from the Mayor's Fund for London will help pay for the first full-time project worker for Thrive Outside. London boroughs and schools pay around 25 per cent of the cost for each child attending the scheme

Mike Gee set up Free to Be Kids with two colleagues after working with vulnerable children and their families for 17 years - 11 as a qualified social worker. "I felt work with vulnerable children needed to focus on strengths as well as risks," he says. "We need to build their resilience, and help them gain a stronger sense of who they are even when their life is difficult." The Thrive Outside scheme offers children and young people the chance to take part in therapeutic residential trips with a focus on outdoor activities.

Children living in London between the ages of eight and 13 are referred to Thrive Outside by schools, social workers and other professionals when there are concerns about their emotional wellbeing, social relationships or lack of opportunity. "We only work with vulnerable children and we have a number of criteria to make sure we are reaching the right kids," says Gee. In 2016/17, children were referred from 22 organisations across 12 London boroughs.

The scheme kicks off with a "gateway residential" in the countryside attended by 20 to 40 children who are divided into small groups. Many have never left London before so the chance to camp out overnight or see the sea are new experiences. Activities might include meeting animals at a farm, canoeing, cycling or campfire cooking.

During a typical residential a child will spend more than 70 hours with adult volunteers who are trained to affirm the young people's worth, identify latent talents, listen, show they care and model problem solving. "If you compare that with the amount of time a child sees a social worker, it equates to more than one year of social work or CAMHS (child and adolescent mental health services) visits in one week," says Gee. "This allows us to understand how the kids function on a deeper level and the kind of help they might need from us longer term."

As well as allowing them to enjoy new experiences and start to build a better sense of themselves, residentials give many children a break from often difficult home circumstances.

Following the initial trip, children with higher needs are offered smaller, more targeted residentials with around eight to 10 attendees. "There might be a group struggling with social interaction, so we will do raft building and other activities that encourage them to work together," says Gee. "We can help them manage the situation when things go wrong - maybe the raft falls to bits - and model how to deal with frustration so they become better at managing emotions and solving problems."

While the residentials are entirely led by volunteers, Free to Be Kids intends to employ its first full-time project worker to help expand the Thrive Outside programme this year. The organisation is also training up some young people who have been through the programme as part of a Young Leaders scheme. 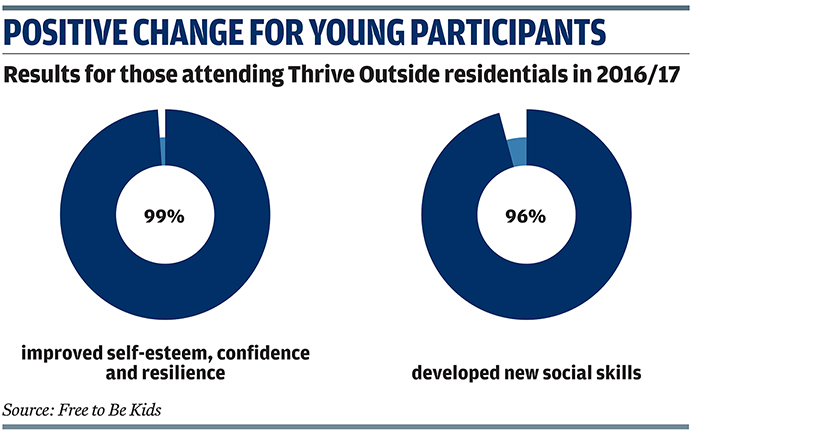 Around 220 children have taken part in Thrive Outside so far. Evaluation by Free to Be Kids shows 99 per cent of children attending residentials in 2016/17 reported improved self-esteem and/or social confidence. In all, 96 per cent had developed at least one significantly improved social skill including making or keeping friends, resolving frustrations without lashing out, and relating better to adults. Meanwhile, 86 per cent had felt brave enough to try something they had never before felt possible.