How therapy helps deaf children get a better start

To help deaf pre-school children develop listening and spoken language skills, ensuring they have an equal start at school

The Auditory Verbal programme costs Auditory Verbal UK £6,825 per family per year to provide. Funding comes from fees paid by families and professionals for therapy services and training, as well as grants from charitable trusts, foundations, corporate supporters and individual donors. A donation of £135,000 from the City Bridge Trust is contributing to provision in London

Auditory Verbal therapy is a specialist intervention that aims to equip parents with the skills to maximise their deaf child's speech and language development. The approach forms part of mainstream support for deaf children in North America, Denmark and Australasia.

After training in Canada, Jacqueline Stokes became the first Auditory Verbal therapist in the UK, working with children from her home in Oxfordshire. She went on to establish the charity Auditory Verbal UK (AVUK) and led it until her retirement in 2012.

She also developed AVUK's training programme for professionals working in the NHS and private practice, which is accredited by US-based certifying body the AG Bell Academy and approved by the Royal College of Speech and Language Therapists.

The Auditory Verbal approach stimulates auditory brain development, enabling deaf children with hearing aids and cochlear implants to make sense of the sound relayed by their devices. As a result, children with hearing loss are better able to develop listening and spoken language skills, with the aim of giving them the same opportunities as hearing children.

Families may self-refer or may be referred by a professional such as a teacher of the deaf. Fortnightly sessions take place at the charity's London or Oxfordshire clinics, but families come from across the UK. "Children can come to us at any time under the age of five, after they have had hearing aids or cochlear implants fitted, which can happen from the age of two months," says Frances Clark, senior Auditory Verbal therapist and London clinical lead at the charity. "We have very specific strategies based on developing listening. The auditory cortex needs to be stimulated in the first three and a half years otherwise that part of the brain gets used by other functions such as touch or vision. So our first strategy is to support parents to assess whether their children's hearing aid or cochlear implant is working correctly."

On top of these practical issues, parents are taught techniques to develop their child's listening and spoken language, so that paying attention to the sound around them becomes automatic, and hearing and listening become an integral part of communication, play, education, and eventually work. "We give parents strategies they can use at home, at bathtime, in the car, at mealtimes, all developed through play," says Clark. "We need to be sure that sound is getting to the child's brain and stimulating their auditory cortex, so we will be singing, or making interesting sounds with younger children, and with older children we will look at conversation, social skills, and how they can use the language they have developed to make friends." Therapists base age-appropriate games and activities on each child's interests.

Therapists also support parents with their own feelings around their child's impairment. "All parents are on a different journey," explains Clark. "Most deaf children are born to hearing parents, and they may know nothing about their child's impairment. They want their child to be able to listen and speak along with the others in the family. Parents can be in a state of grief and shock so there is a bit of counselling and support at the beginning, to help parents feel they are the expert on their child."

The sessions are delivered by an Auditory Verbal therapist who is a qualified teacher of the deaf, speech and language therapist, or an audiologist who has undergone three years of postgraduate training to become a listening and spoken language specialist, accredited through the AG Bell Academy. Most children graduate from the programme after two or three years, says Clark. "We will carry out an assessment to ensure their speech and language is at an age-appropriate level, and also assess their social use of language," she says.

Families pay fees on a sliding scale dependent on income, with families earning less than £13,000 a year receiving 95 per cent bursary support. AVUK pays up to £300,000 a year in family bursaries. A total of 45 families on low to middle incomes currently receive bursaries. 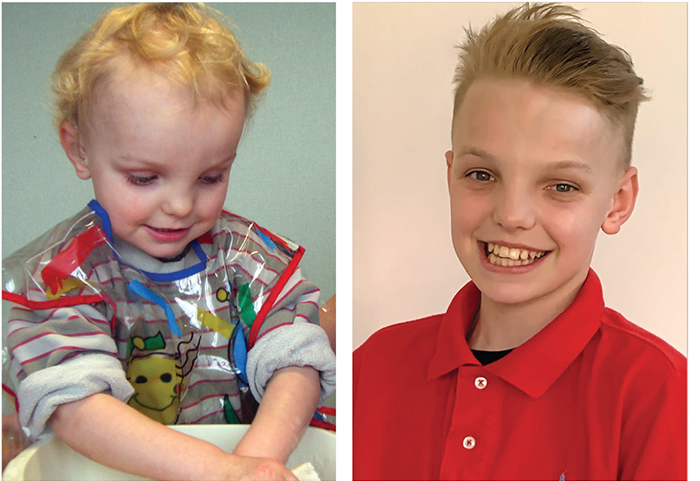 Ernie* (pictured above), now 12 years old, was diagnosed at 11 weeks with profound hearing loss in his left ear and severe to profound hearing loss in his right ear. "As you can imagine, that was devastating at the time. We thought Ernie would never be able to talk," says Ernie's mother Chrissi. "We didn't know anyone who was deaf or had deaf children and we didn't know what support was out there."

When Ernie was diagnosed, a teacher for the deaf came to the house to show Chrissi and Ernie's father John how to communicate with their son visually. "I felt as if she was connecting with my new son more than I was," says Chrissi. The couple heard about the Auditory Verbal approach, and when Ernie was seven months old went to visit AVUK in Oxfordshire.

"On our first visit we met the lovely founder of AVUK Jacqueline Stokes," says Chrissi.

During the first session, Stokes played with Ernie, using a toy and saying the words "around and around", says Chrissi. "Ernie didn't take his eyes off the toy and Jacqueline encouraged him to say the words. To our surprise, he did. They were his first clear words."

Ernie's family was able to benefit from AVUK's bursary scheme. "Finding the money and the childcare for my other boy and travelling to AVUK's offices in Bicester, Oxfordshire, was a worry for us until they told us about the bursary scheme which was an amazing help," says Chrissi.

"From the therapy to preparing for Ernie's cochlear implant assessment, the help we had from AVUK staff was amazing. It's the support they give you to be able to support your deaf child. You think you're going for the therapy but you come away with so much more." The family was given CDs of sessions, which helped keep dad up to date.

Ernie is now thriving at school. "People often don't realise Ernie is deaf until they notice his implant because he speaks and listens so well," says Chrissi. 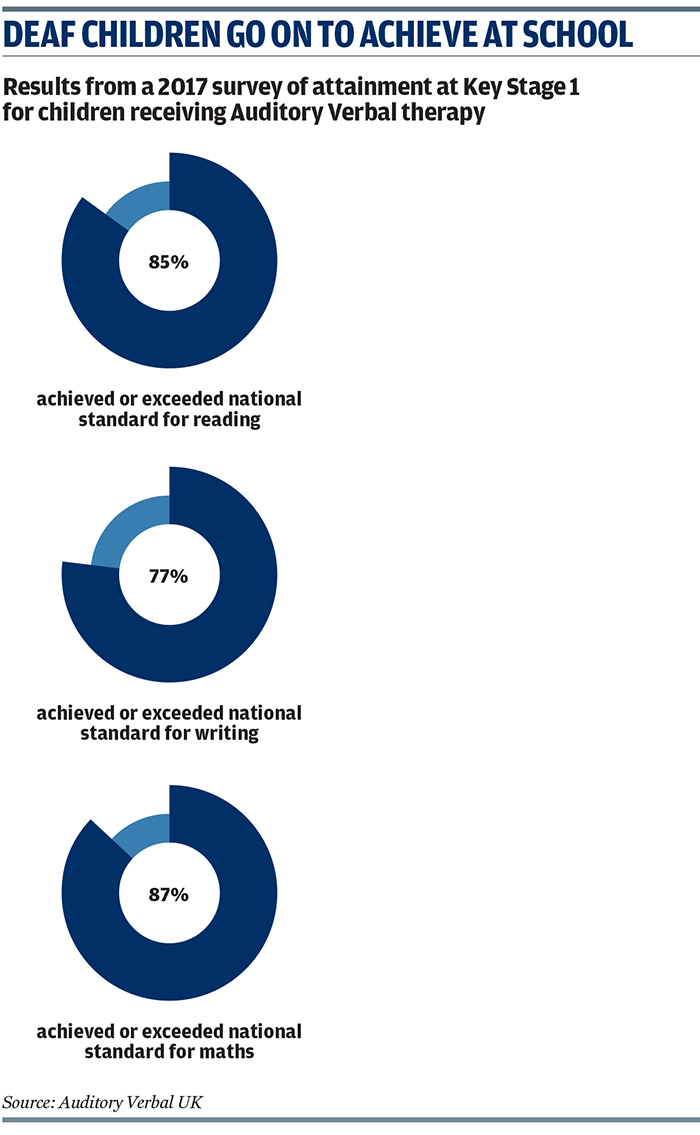