How intervention helps families to turn a corner

Targeted intervention programme helps families to change their lives and improve outcomes for children with child in need plans.

To improve outcomes for children with child in need plans

Cheshire East Council's children's services department and family support provider Catch 22 were keen to improve outcomes for children in need. While social workers were reacting to crises in child in need cases, the need to prioritise child protection and care work was preventing them devoting enough time to achieving sustainable change. "Children were spending a long time as children in need, without necessarily getting the appropriate interventions," recalls Kate Wareham, Catch 22 director of young people and family services. "That could lead to things getting worse." The organisations went on to jointly develop Project Crewe.

Starting in August 2015, the project saw child in need cases allocated to non-social work qualified "family practitioners". They were recruited from backgrounds including early years and mental health and received 12 days' training in solution-focused practice. Family practitioners were based in small teams or "pods" of four each managed and supported by a "social work consultant" - a senior social worker with responsibility for the cases in question.

Families were referred by social workers and allocated to the project after discussion with Catch 22. Each family practitioner had a maximum caseload of 12 and was therefore able to make an average of 10 visits each month - seeing families three times more than social workers. Visits could include one-to-one sessions with children, parenting support or whole-family sessions to strengthen relationships. Review meetings took place every four to six weeks with the social work consultant attending the first two and then every third meeting until the case was closed.

One family's four children had been on child in need plans several times, due to concerns about neglect and living conditions. Things had improved with the involvement of social workers but deteriorated after that support was withdrawn. Under the wing of Project Crewe the family came together to agree goals that were regularly reviewed. "We'd ask what we could expect to see different next time and in what timescale," recalls Wright. "We'd return to see if it had worked, looking at what helped it work, then agree the next task. This family had a propensity for allowing emergencies, or perceived emergencies, to get in the way. So we were constantly contingency planning, to ensure tasks could still happen."

Once families were ready to move on, some got continued support from a trained volunteer to help them stick to rotas and routines.

The DfE-funded Project Crewe ended in March this year but Cheshire East is funding it under the new name of Fact22 up to July 2018. Currently, around 80 children are receiving support from two pods: one in Crewe and another that launched in Macclesfield in April. 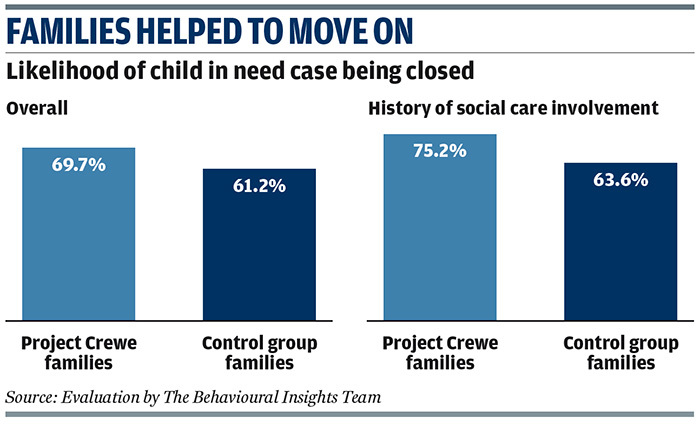 In a randomised controlled trial involving 132 cases, 88 were allocated to Project Crewe and the rest to a social worker-supported "business as usual" control group.

A risk analysis of 30 cases showed a greater increase in "protective factors" among families involved in the project, suggesting a lower risk of problems escalating. However, the evaluation also found cases receiving standard social work support were closed more quickly: 36 per cent within the first six months, compared with 14 per cent for Project Crewe.