How enterprise turns offenders from crime

£35,000 from a range of funders including UnLtd, the Shackleton Foundation and The Funding Network

As part of the Year Here postgraduate course in social innovation, Josh Babarinde worked with at-risk young people in East London youth clubs. He says many felt backed into crime as a means of supporting their families. "These young people do not see crime as a choice," he says. "Many are the eldest sibling, they don't have a dad around, mum doesn't work, they feel it is incumbent on them to survive, so they go and deal drugs."

Employment is the biggest factor in reducing offending, fostering social values like compromise and routine, he says. "Interventions often pigeon-hole so-called ‘naughty' kids into catering, construction or horticulture, but that doesn't work for everyone."

Repairing phone screens is a skill that can be learned and delivered quickly, meeting young people's need for instant gratification. A phone can be repaired in half an hour, it pays well at £50 a time, and also meets a real need - 29 per cent of people have a cracked phone screen, says Babarinde. He trialled a smartphone repair scheme, obtaining free tuition from a phone repair company. With support from the Year Here social enterprise incubator, a 10-month course in social innovation, Babarinde developed the Cracked It programme, which launched in 2016.

Local authorities and housing associations pay Cracked It to provide a five-day course for eight 16- to 24-year-olds at a time. Commissioning bodies may refer at-risk young people or ask the team to locate them through outreach work, sometimes in partnership with local agencies and charities. "Housing associations will sometimes say we have this estate, we have got challenges with unemployment or crime, but we don't know who the young people are - can you find them?" says Babarinde.

During the Cracked It Bootcamp young people learn to repair smashed screens on a range of phones, as well as receiving support with employment skills and pastoral needs. "There needed to be a real market for the skills we pass on to them - the demand for hand-crafted spoons is not particularly booming," jokes Babarinde. At the end of the course the young people run a stall to sell their repair services to the public and showcase their talents.

Afterwards they are given the opportunity to progress to a six- to nine-month programme staffing pop-up phone repair outlets in large workplaces such as banks with one or two on average from each course going on to this next stage. During this time they develop core employability skills and pick up the customs and habits of a workplace. At the end of the programme they are supported to take the next step into education, employment and training.

Those who do not progress to the longer programme often decide to market their skills themselves via social media.

Income comes from commissioning bodies and the phone repair business. "We rely on grants for around half our income but the aim is 100 per cent sustainability," says Babarinde.

The scheme works with more young men than young women, reflecting the demographics of young offenders generally. "But we are working to ensure women also have opportunities to engage with the programme. There's a clapped-out notion that tech is a man's industry." 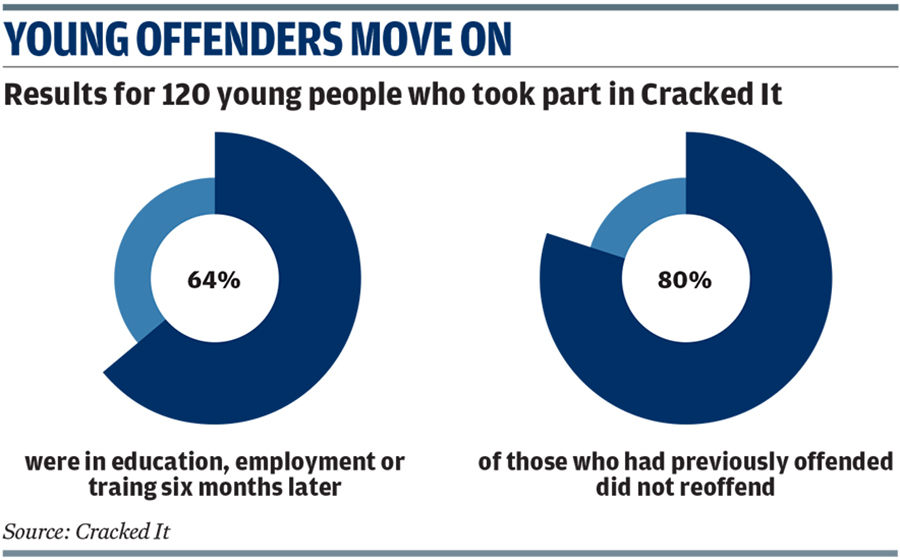 According to Cracked It's own audit, of the 120 young people who have taken part in the programme since it launched, 64 per cent were in education, employment or training six months later. Of those who had previously offended, 80 per cent did not reoffend. In all, 89 per cent of young people who took part said they felt phone repair was a credible way to make money after graduating from the programme. Cracked It was named Social Enterprise of the Year by The Centre for Social Justice in 2018.