An initiative that engages young people in the "teachable moment" when they are detained by police, is achieving success in preventing reoffending.

Created by the Metropolitan Police and run in conjunction with the New Era Foundation, formerly the Milestone Foundation, the Divert scheme aims to help 18- to 25-year-olds into sustainable employment, training and education opportunities, and reduce victims of crime.

Now in its third year, the programme was piloted in Brixton and has subsequently been rolled out to six custody suites in the capital. The sites in Brixton, Tower Hamlets, Lewisham, Croydon, Wood Green and Hackney have trained custody intervention coaches (CIC) who can approach suitable detainees in custody.

The Football Association is backing the scheme and clubs such as Crystal Palace, Millwall and Tottenham have joined the partnership to provide staff from their charitable foundations to act as CIC. The Prince's Trust has also committed two part-time co-ordinators to Divert to support young people into its programmes.

Ann-Marie Willison, New Era Foundation's programme manager, says that if the detainee is willing to engage, the CIC will have a one-to-one consultation of 45 minutes in a private room.

"CIC will tailor their approach to the individual's needs, assisting them in a variety of ways to facilitate access to training, education or employment opportunities," she says.

CIC are also able to help young people with housing issues or arrange support for mental health or addiction problems, she adds.

Willison says the programme is open to all detainees aged 18 to 25, and CIC consider each young person on a case-by-case basis.

The gender breakdown for young people engaging with Divert shows 95 per cent are male, with 62 per cent aged 18 to 21.

Drug-related criminal activity was the most common offence (54 per cent), followed by violent crime (22 per cent) and other offences such as burglary and theft (24 per cent).

Willison says the CIC remain in contact with individuals they encounter for as long as necessary, ranging from three months to a year, or sometimes even longer.

Willison first met Kevin Luke when he was in custody at Brixton police station where he was being questioned about a domestic dispute. Kevin, who had previously been stabbed by a gang during a robbery at a drug house in Brixton, was already trying to keep out of trouble.

He was booked out of custody to have a meeting with Willison who talked to him about his future.

"Something inside said ‘listen to what she has to say'," he says. "I got an opportunity to meet someone in an office in Liverpool Street. There were nice people and it was a good environment. It was somewhere I would like to see myself," he says.

Now 24, Kevin is on a business administration apprenticeship at a hospital and is hoping to secure a permanent job at the end of his training.

"The environment I was in was literally a click away from getting into trouble - the Divert scheme has changed my life completely," he adds.

Met Police inspector Jack Rowlands, who founded and leads Divert, believes engaging with young people at the point of police detention is critical to its success.

"Divert has already proven over the past three years that using police custody as a teachable moment diverts young people away from crime."

He says Divert continues to work collaboratively with organisations and communities such as the FA and the Prince's Trust to make Divert available throughout the UK. 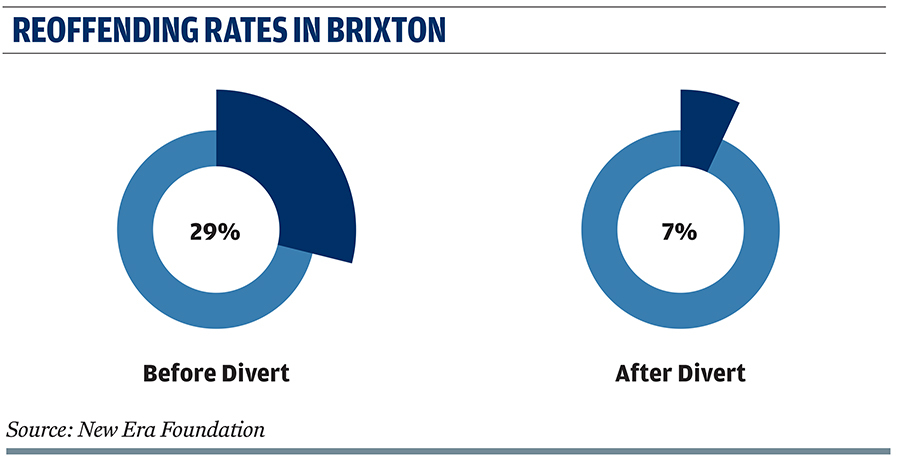 Of the 116 young people who engaged with Divert's pilot scheme in Brixton, 87 per cent are now in training or employment.

"It costs £65,000 to imprison an offender and by helping these young people to break the reoffending cycle, the pilot potentially saved the taxpayer £115m," says the charity.

The programme also saw the reoffending rate among young people in Brixton drop from 29 per cent to seven per cent during the year-long pilot.

The Met has also published figures from Divert's activity in Lambeth, Tower Hamlets and Hackney for the period November 2016 to July 2018, which shows 342 young people engaged with the programme. Of these, 40 per cent are now either employed or enrolled on a training or development course.

It says the reoffending rate among this cohort is eight per cent - 21 per cent less than the average rate for adults in Lambeth.