Environmental charity supports children aged six and older to express their frustration and fears about the lack of progress on tackling climate change.

Climate change is the most urgent issue of our time. Yet not enough is being done. Children and young people are taking action because the adults entrusted with making policy decisions are not doing enough to address the impending climate crisis. That is the motivation behind the young people leading Youth Strikes 4 Climate.

As an organisation committed to the principles of "one world" and children's rights, Woodcraft Folk are supporting their young members to explore both their right to strike and climate change issues. From Leeds to Norwich, Edinburgh to Exeter, Woodcraft Folk members have taken an active role in the school strike protests including the recent UK day of action in February and a global day of strikes in March. Young people have also been exploring related activities in their regular group nights, in order to develop a critical awareness of the world and take action on issues which they care about.

One Elfin group, attended by children aged six to nine, explored the topic by watching Greta Thornberg's TED Talk - Greta is the 16-year-old from Sweden who initiated the Youth Strikes 4 Climate movement. The group looked at where the protests were now happening all over the online world map. They read news articles about the lack of attendance by MPs at the parliamentary debate on climate change, inspiring them to look up the attendance information of their local MPs - none of whom attended. As a result, the group have now written a letter to their MPs demanding that they prioritise the environment.

Elsewhere, young members have been organising, attending and speaking at strikes across the country. Young member Cherry Tucker took part in the March strikes (see My View, below), which has resulted in action by her local council. Leeds City Council declared a climate emergency, one of the first UK cities to do so.

Two children from an Elfin group in Stirling were among those invited to Stirling Council and were able to discuss issues directly with a councillor, local MSP and the council's senior sustainable development officer. Young people around the world are striking from school because they want politicians to sit up, take notice and take action. Children and young people are concerned about the future and through the strikes are realising that by working together they can be a powerful force for change.

Esther Bolton, a 12-year-old member of the Edinburgh Woodcraft Folk, says: "When I first heard about the climate strikes, I didn't want to miss school but I realised that the future of our planet is more important than a few hours of school. So, a friend and I agreed to go. We stood in the cold for an hour or two, chanting and cheering and making a noise. When everyone around us was chanting together, holding their banners, I felt powerful, like we could make a difference. And we will. Because I have had enough of politicians pretending that nothing is wrong. That we will be okay. If we act now, then we will be alright." 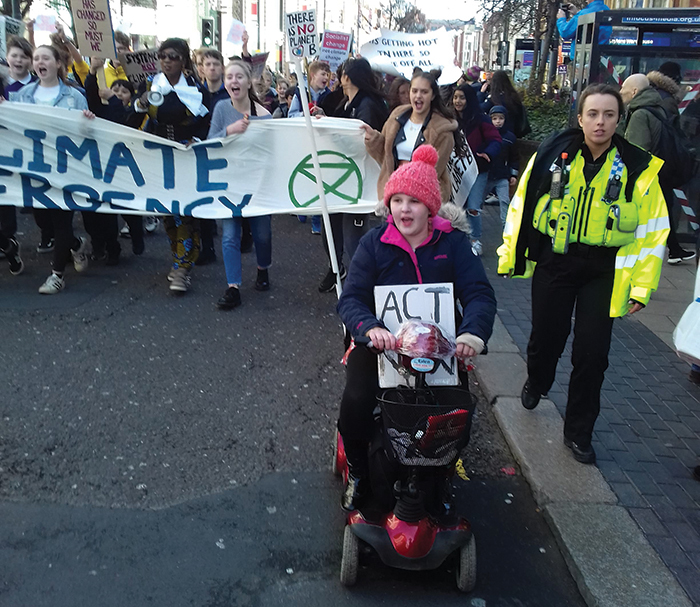 My View
By Cherry Tucker, Leeds

I wasn't sure whether to go. Mum said something that really made me think and may have also been the tipping point of my decision: "What's the point of an education if there isn't going to be a future?" This is why I went and because it is beyond turning out the lights or getting a smart meter. This is bigger than all of us and if our politicians aren't going to protect our future, we need to.

When I arrived for the first time, driving round on my mobility scooter - "The Beast" - I was super nervous. However, I had nothing to worry about. We gathered on the town hall steps and did loads of chants and waved our placards, we did some dancing, drank lots of tea (in true British style) and there were lots of speeches. I also made a speech as I am the sort of person who goes in all guns blazing when I find my confidence.

For the second strike in my city there was a march and we had loads of dancing, tea drinking and more speeches, I made one again.