Behind the Inspection Ratings: Safeguarding in schools

Ofsted inspections show the majority of maintained schools have effective safeguarding arrangements in place, but there are concerns about standards in some faith-based schools and the independent sector.

Safeguarding in schools has come under the spotlight in recent years not least because of the so-called "Trojan Horse" scandal in Birmingham, which uncovered extremist teaching in a handful of academies.

Other factors include heightened awareness of child sexual exploitation (CSE) and high-profile child protection cases such as the death of four-year-old Daniel Pelka in 2012 and subsequent serious case review, which highlighted failings in school safeguarding policies and procedures.

Safeguarding is now a fundamental element of school inspection. Since September 2015, a statement on the effectiveness of safeguarding has been included in all Ofsted inspection reports. Any school with ineffective safeguarding arrangements automatically receive an "inadequate" rating overall.

Inspectors consider how well schools identify and respond to signs of child abuse and neglect, how they are tackling issues like CSE and female genital mutilation, and how well schools protect pupils from extremism and radicalisation.

According to guidance for inspectors published in August 2016, the signs of successful safeguarding include the fact children "feel safe" and can identify a trusted adult they could raise any concerns with and ensuring "any safeguarding concerns are shared immediately with the relevant local authority" (see case study).

In March 2015, the Department for Education set out the broad responsibilities for a range of agencies, including schools, in Working Together to Safeguard Children statutory guidance. This makes it clear school governing bodies, management committees and proprietors at maintained, independent and non-maintained special schools have duties in relation to safeguarding and that senior leaders are responsible for safeguarding arrangements.

These duties include ensuring there is a designated lead for safeguarding, safe recruitment practices and appropriate supervision and support for school staff.

In addition, schools must follow further, more detailed statutory guidance on keeping children safe in education, which was updated by the DfE in September 2016. This emphasises that safeguarding is "everyone's responsibility", but goes on to highlight the importance of school staff.

"School and college staff are particularly important as they are in a position to identify concerns early, provide help for children and prevent concerns from escalating," it says.

All staff should be familiar with the school's safeguarding processes and policies, and know what to do if a child tells them he or she is being abused or neglected. "Staff members working with children are advised to maintain an attitude of ‘it could happen here' where safeguarding is concerned," says the guidance.

When it comes to how schools are doing on safeguarding, the picture is generally good, according to Ofsted's annual report on education for 2016. It found the "vast majority" of schools and others "take their safeguarding responsibilities very seriously and take action to keep pupils safe and well".

However, in 2016 two per cent of maintained schools - 64 schools - were found to have ineffective safeguarding arrangements. Of these, 34 were primary schools, 19 were secondaries, eight were special schools and three were pupil referral units (see graphics). Meanwhile, the proportion of independent schools where safeguarding was not effective was much higher at 15 per cent - 37 out of 248 inspections in 2016.

"Whether in the state-funded or independent sector, these weaknesses were the result of poor governance, leadership and management," says the report. "Leaders failed to check whether staff were complying with instructions and applying guidance as to how to keep children safe."

Schools with ineffective safeguarding will automatically be rated inadequate for leadership.

At both maintained and non-association independent schools with ineffective safeguarding, pupils' behaviour, teachers' classroom management and anti-bullying policies "were too often ineffective".

Sometimes, too little was being done to check on pupils who were vulnerable to being influenced by extremists, says Ofsted's annual report. This was a particular issue in some faith schools - 25 out of 37 were judged ineffective for safeguarding. Inadequate safeguarding training for staff, leaders, governors and proprietors was an issue in many of the independent schools where safeguarding was ineffective.

A third of maintained schools and more than a quarter of independent schools found to be inadequate because of ineffective safeguarding were asked to improve the way in which they supported pupils' understanding of British values and the dangers of extremism.

In addition, 40 per cent of independent schools and a third of maintained schools found to be ineffective for safeguarding also "did not prepare pupils well enough for life in modern Britain".

More than half of independent schools where safeguarding was ineffective did not meet record-keeping standards. "Many of these schools were not following guidance as to how to check pupils were safe if they were not attending regularly or were arriving late to school," says Ofsted's report. 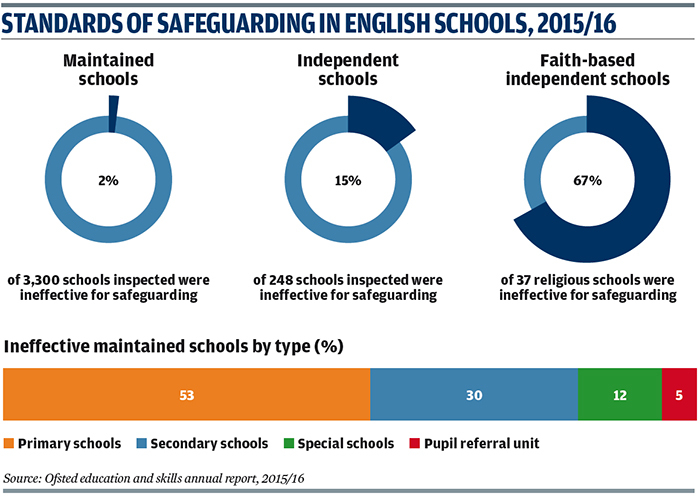 The way Stanley Park High in Sutton is structured plays a key role in efforts to keep pupils safe and well, according to head teacher David Taylor.

For the past five years, the school has been divided up into four "mini schools", including one specifically for about 90 children with autism. The others are communities of 350 students, with roughly 70 from each year group.

The smaller size of the "schools within a school" means any problems or safeguarding concerns are more likely to be spotted, says Taylor.

"The system is set up so at least one adult knows each child incredibly well, so then chances of issues relating to wellbeing or safeguarding slipping through the net are diminished," he says.

That person is generally a child's tutor. Unlike at some other schools where tutors may only see pupils at registration, Stanley Park High students see tutors for half an hour each day for "advisory time".

In addition, Year 7 and 8 pupils spend a significant amount of time with form tutors who teach its Excellent Futures Curriculum, which includes humanities, art and design, computing and personal development.

"If a tutor is seeing a child on a regular basis, that obviously builds confidence and relationships, and there is a greater chance of issues being aired," says Taylor.

In Years 9, 10 and 11, tutor groups are made up of a mix of pupils from different year groups. The small size of these - just 18 pupils in total - means tutors can give more individual attention to each student.

"Also, the mixed age groups provide an opportunity for the older ones to support the younger ones through - if you like - growing up," says Taylor.

When it comes to pupil wellbeing, the innovative set-up appears to have paid off with the school rated "outstanding" for personal development and welfare.

"Staff keep a constant and careful eye on all pupils, whether vulnerable or not, so that problems are sorted out quickly," says the school's latest Ofsted report, which describes safeguarding arrangements as "effective".

The report says records are "meticulous". "Child protection staff quickly report concerns over children's welfare to the relevant professionals and are alert to identifying radicalisation should it occur", it adds. "In all their work, senior leaders keep parents fully involved and informed."

Strong relationships between teachers and parents are also very important when it comes to safeguarding, says Taylor, who writes a weekly blog to keep parents informed and involved in the school's work and vision.

Parents come into school on a regular basis in Years 7 and 8 as part of Excellent Futures, which involves pupils seeing a project through from start to finish, resulting in a presentation, show or exhibition.

Meanwhile, it has replaced traditional parents' evenings with "student-led conferences" where children talk about their progress, strengths and weaknesses, with their tutor and parents.

"Parents love this as opposed to the very poor experience parents' evenings tend to be, which is distant, don't involve the child and frustrating for parents, teachers and children alike," says Taylor.