A recent government-commissioned review emphasised the vital role played by children's homes, but what does Ofsted inspection data reveal about the standards of residential child care?

Inspection results for children's homes reveal a "substantial improvement" in standards this year compared to last, according to Ofsted data.

The trend suggests new quality standards for residential care, introduced in April 2015 alongside higher qualification and training standards, are starting to have an impact amid a new focus on the overall quality of homes.

This improving picture was captured by the government-commissioned review led by Sir Martin Narey. Published in July, Narey's final report described residential care as a "much misunderstood and grossly under appreciated part of children's social care".

It concluded the quality of residential placements was generally good and emphasised that children's homes may well be the most suitable place for some children and young people.

There are other measures of quality. However, Narey points out the challenges in drawing firm conclusions about settings' impact on children's achievement and overall wellbeing given most children and young people generally only stay in residential care for brief periods.

"Various pronouncements that seek to link residential care to poor academic outcomes, or to spending future time in custody, generally fall into the trap of confusing correlation with causation," says Narey's report.

"The most dependable guide to the quality of care flows from Ofsted inspection results."

At the end of March 2015, there were 6,031 children living in homes with inspection data available for 98 per cent of placements. Nearly three-quarters were living in homes rated good or better - a slight decrease from 2014.

While the review gives weight to inspection results, it also cautions against policies that rule out placements in homes that are essentially satisfactory. Ofsted should no longer encourage local authorities to place children only in good or outstanding homes, it concludes.

"I urge Ofsted to clarify - loudly - the reality that a requires improvement verdict means that a home is an adequate home," says Narey.

There is evidence to suggest children who spend longer in residential provision may have better outcomes than those who are only there for a short time, says Narey's report, which highlights the importance of stability in achieving good outcomes for looked-after children.

Of the 6,031 children in residential child care at the end of March 2015, 57 per cent lived in their most recent placement for less than 12 months. About a fifth had been there for more than two years, which compares to 34 per cent of children in foster placements (see graphic).

In recent years, there has been a focus - reinforced by ministers' highlighting the issue - on providing residential placements close to a child's home area to help maintain family and community ties, reduce a sense of detachment and isolation, and ensure home authorities can keep a close eye on children's welfare and progress.

But Narey concluded it was more important to find the right placement for children than focus on distance and geographical boundaries.

At the end of March 2015, 41 per cent of children and young people in children's homes were living within their own local authority area, about 40 per cent lived between 0 and 50 miles outside the local authority boundary, while 19 per cent were more than 50 miles from their home authority (see graphic).

The data shows children living in children's homes were less likely to be within their own local authority than in previous years.

In its report, Ofsted stresses it "does not equate distance with either a failure to meet appropriate need or poor outcomes for children".

Another assumption has been that smaller settings are likely to be more effective, but Ofsted has made it clear it does not prefer smaller homes, says the Narey report.

When it comes to who runs children's homes, the vast majority are in the private sector, while the number of local authority-run homes continues to fall.

At the end of March, there were 2,071 active children's homes. Of these, nearly 70 per cent were run for profit by private companies, 22 per cent were run by local authorities and eight per cent by the voluntary sector. 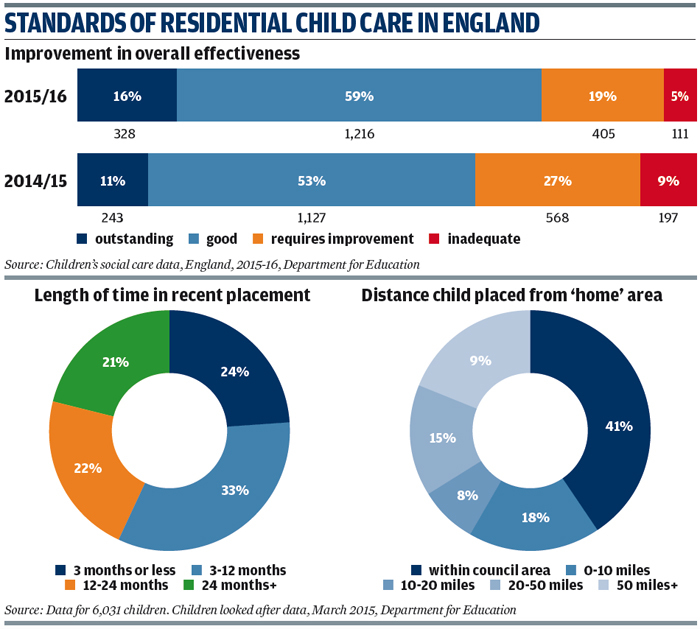 It was judged "outstanding" at its most recent full Ofsted inspection and was found to have "sustained effectiveness" at an interim inspection in March.

"Children and young people in this home are making significant progress from their starting points, staff know their needs well and they have developed trusting and nurturing relationships with them," says the interim inspection report.

Children have comprehensive placement plans and all have appropriate education, training and employment arrangements in place.

One reason children and young people at the home thrive is the fact that the 21-strong staff team, which ranges from full-time workers to sessional, peripatetic staff, push hard to ensure care and education plans are delivered - even if that means challenging the local authority they work for, says Abigail Marsden, strategic manager for corporate parenting at Northamptonshire.

"Everything they do is about the children that live there and every decision made is based on what is best for them," she says.

"Sometimes in achieving that they have to advocate very strongly to push plans through. They are not fearful of challenging practice they think needs to be challenged to get the best outcomes for children."

This is true when it comes to education. "At times, they have had to be very assertive with schools or the local authority's virtual school in ensuring the children have the right and best school place," says Marsden.

The current age range of residents is 12 to 18, although young people can stay on after 18 in a training flat. All young people are in education, training or employment when they leave the unit.

"Not only are they in education or employment, but they have aspirations," says Marsden who says this is in part due to the fact staff are "aspirational" for residents - something also noted by Ofsted.

Wherever possible, the goal is to enable children to return home to their families and maintaining family ties is a key part of the setting's approach.

"We recognise that enduring relationship with family is important and it should be as positive as it can be because eventually we will be gone," says Marsden.

While many families are naturally hesitant about children entering residential care and not sure what to expect, they are made to feel welcome at regular family events and contact sessions, and so "quickly lose any of that hesitation that may be a barrier to working together to achieve plans".

The home also goes out of its way to promote good relationships between young residents and their allocated social workers, something that has been particularly important given recent high turnover in social care staff.

"They make it as easy as possible for social workers to make informal or formal statutory visits and be a regular feature in the home," says Marsden.

Young people are involved in decisions about the home, as well as their own care plans, and are responsible for the agenda at twice weekly discussion meetings.