Behind the Inspection Ratings: Adoption

As the number of children being placed for adoption continues to fall, the government's latest strategy emphasises the need for matches to be made without delay and stresses the importance of quality support.

Despite the emphasis the government has placed on adoption, the number of children being adopted is continuing to fall.

The figures reflect an ongoing fall in the number of agency decision maker (ADM) decisions and adoption placement orders - a trend the government is keen to reverse.

This is in line with the Adoption Leadership Board's quarterly data, which indicates a decline in ADM decisions and adoption placement orders since the second quarter of 2013/14.

The number of new placement orders fell from 1,380 to 890 over the same period. But the board suggests plunging rates may have started to plateau.

The decline has been linked to the impact of a number of high-profile court judgments on adoption and care order cases, notably Re B and Re B-S, which prompted an "extreme" reaction from local authorities, according to the DfE.

Concern over the way these judgments were being interpreted prompted the Adoption Leadership Board to issue guidance in November 2014, stressing the judgments "do not alter the legal test for adoption" or mean that social workers must thoroughly investigate every single alternative to adoption before going down the adoption route.

The Re B-S ruling, made in September 2013 by president of the family division of the High Court Sir James Munby, emphasised the need for evidence to "address all the options which are realistically possible" for a child.

But the guidance says: "The court does not need to see in-depth analysis of options which are not realistic for the child concerned, nor an assessment of every option that is put forward by a family."

The drop in adoptions has come alongside an increase in special guardianship orders (SGO).

DfE statistics relating only to children in the care system show there were 3,520 made in 2015, up five per cent on the previous year.

However, a DfE review of SGOs, published in December 2015, found a "significant minority" of children were being placed at risk as a result of inappropriate SGO arrangements.

The government's latest strategy Adoption - A Vision for Change, published in March 2016, set out measures designed to clamp down on inappropriate SGOs and halt the decline in adoptions. It calls for adoption to be "pursued determinedly when it is the right option for a child" with adoption plans "progressed swiftly by social workers with a sense of urgency".

Latest figures on the timeliness of adoptions suggest the time taken between a child entering care and being placed for adoption is continuing to reduce. This has decreased from 22 months in 2012/13 to 18 months in 2014/15. While this remained unchanged in 2015/16, the latest quarterly data suggests there has been a shift, with an improvement to 17 months in the first quarter of 2016/17.

The improved speed in placing children for adoption has been a factor in many children's services performing well for the adoption measure under Ofsted's single inspection framework. Latest figures show that of the 121 councils inspected, seven were judged "outstanding" - including Lincolnshire County Council (see case study) - and 58 "good" for adoption services. A further 48 were rated "requires improvement" and eight "inadequate" (see graphic).

Meanwhile, the average number of days between placement order and getting a match has remained static at eight months.

However, the latest data suggests timescales for adopters is declining. In quarter two of 2013/14, half of approvals made by local authorities were made within six months of registration. But in quarter one of 2016/17, this had decreased to 31 per cent. In quarter four of 2013/14, 80 per cent of matches were made within six months of approval, compared with 45 per cent in quarter one of 2016/17.

The government strategy emphasises the need for matches to be made "without unnecessary delay" and stresses the importance of quality adoption support.

To boost support available to adopters, the government launched in May 2015 the Adoption Support Fund. Demand has been so high that the government announced recently that a cap of £5,000 on the amount of money families can claim will remain in place until at least 2018.

It has been a factor in helping authorities and independent agencies perform well for adoption support, as reflected in Ofsted ratings (see graphic). 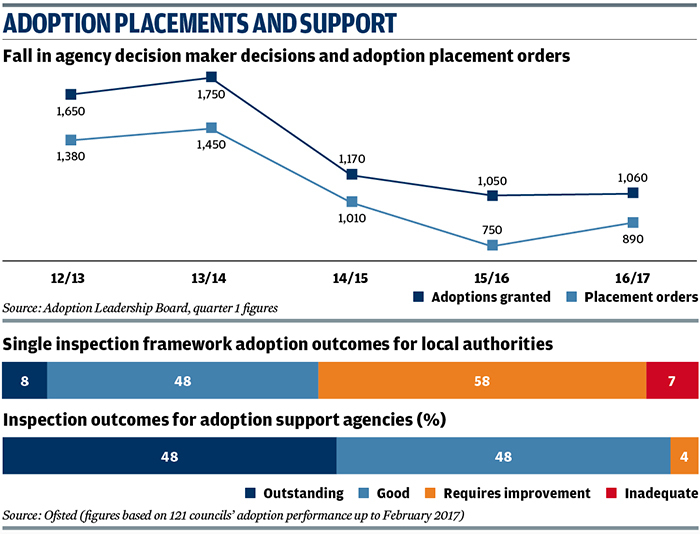 Adoption is identified as an option at "the earliest possible stage" in the child protection process. "It is flagged up at the second review and we're involved in legal planning meetings so our social workers can twin track at that very early stage," says Jones.

"Our children's social workers are responsible for writing the child permanence report, preparing the child for adoption and are involved in contact, so really get to know the child and family alongside the social worker who is undertaking care proceedings. A lot of our assessments are done up front before we even get to court so again that reduces delays."

The authority's latest adoption scorecard for 2013-2015 shows a strong performance when compared to statistical neighbours and the national average.

But its annual adoption report for 2015/16 suggests it may be a challenge to sustain the current downward trajectory in adoption timescales in the light of a reduction in ADM decisions, reducing the cohort of children eligible for adoption, and an increase in applications from parents to appeal placement and adoption orders.

Lincolnshire, which won the 2016 Excellence in Adoption Practice Award from First4Adoption, has just six children waiting for adoption and four have an active match under consideration.

The funding was used to create a recruitment team and bring back in-house co-ordinators to take calls from prospective adopters and ensure a swift response.

There is also a focus on providing excellent post-adoption support. "Our view is that support is a right and an adopter should never feel worried about picking up the phone," says Jones.

The service runs an Adoption Support Helpline through which adoptive families can access three tiers of help - from advice or signposting to a call back from a trained therapist to a full re-assessment of their support needs.

In recognition of research on the risks of adoption breakdown in adolescence, it runs a drama therapy group for this age group and is working with the charity Family Action to boost knowledge of attachment in schools, especially secondary schools.

A family finder co-ordinator - a post initially funded with ARG money but now made permanent - organises activity days for adopters to meet children and liaises with other partners in the East Midlands and further afield when it comes to wider searches. "This frees up other social workers to provide that intensive support to adopters and children because she can do a lot of the admin work and the chasing," says Jones. Meanwhile, the service has put a lot of work into developing compelling profiles for children.

It helps that adoption is a priority across the council and understood by senior leaders. Robust performance information - and the ability to understand what it is saying - plus a willingness to learn from others, are also key when it comes to making improvements, says Jones.